Valais Retreat is a yearly event of inquiry and exploration of the Art of Aikido, Yoga and Meditation. 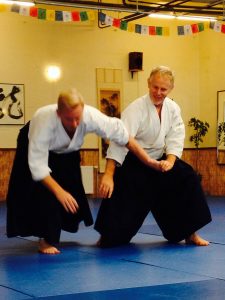 Are you looking for a way to restore and take care of yourself, discover yoga, meditation, aikido and enjoy a beautiful nature with a delicious vegetarian food?

This retreat is for you!

Join Patrick Cassidy and Durward Burrell for a unique inner voyage at the Hôtel Pension Beau-Site Chemin-Dessus (VS).

This year we will be offering the retreat for students of Aikido, Yoga and those people who have no experience in either practice.  Each participant will be able to attend the group events and choose between either Aikido or Yoga specific classes.  So, each participant will have the chance to join the group meditation and Body consciousness explorations, and either Aikido or Yoga classes or a little of everything. 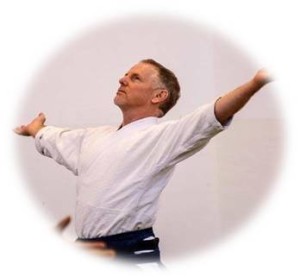 Patrick Cassidy has studied the art of Aikido for over 30 years. He spent more than six and a half years living and training fulltime in Iwama, Japan with the late Morihiro Saito, 9th dan. He has also continued his study with other wonderful instructors such as Takeda Yoshinobu, 7th dan, Robert Nadeau, 7th dan, Richard Moon, 5th dan, Peter Ralston, (the founder of Cheng Hsin), and Vernon Kitabu Turner Roshi. Cassidy Sensei also has committed himself to the practice of Yoga. During his stay in Japan he studied with Junko Tomonaga (Founder of the Tomonaga Yoga Institute). He also spent periods at the Sivananda Ashram in Rishikesh India. His study has taken him throughout Asia spending over three years travelling through India, Nepal and Tibet.

Patrick also offers a unique approach to the practice of meditation.  Inspired by his own discovery of the inherent ground of being, and the traditions of Advaita Vedanta, Vajrayana Tibetan Buddhism and Zen, Patrick facilitates individuals to engage the questions of Being and Evolving in a way that lead to authentic experience and change.
The aspect of self awakening and evolution are important themes of the work done at Aikido Montreux. The teachings of Andrew Cohen, Vimala Thakar, Ajja, Eckhart Tolle and the Dalai Lama have inspired the dojo’s approach to the question of what does it mean to be alive and awake. Along with his own experiences and insight Cassidy Sensei offers a framework that gives students the chance to pursue the path of their own awakening and self transformation. 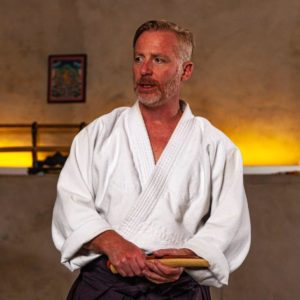 Durward Burrell, 5th Dan Aikikai and conscious yoga instructor, is the lead instructor of Aikido Vevey with over 25 years of experience in martial arts and yoga. Burrell Sensei began his aikido and yoga career in 1999 in the United States as an uchideshi (apprentice) with Patrick Cassidy Sensei (6th Dan, Aikido Montreux). He has also been inspired by and taken many teachings from Robert Nadeau Shihan, 7th dan, Takeda Daiyu Sensei, 6th dan, and Richard Moon Sensei, 5th dan. His main teaching traditions are aikido, yoga and meditation, although he has practiced and includes other aspects of forms such as contact improvisation, mindfulness meditation, NLP and various embodiment arts. His classes aim to help awaken people to broader perspectives. Today he’s the head instructor at Aikido Vevey.